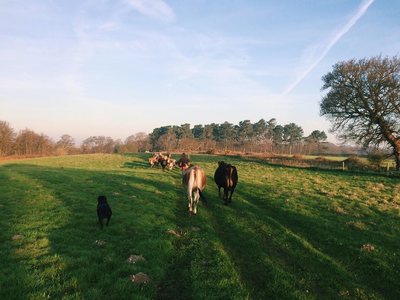 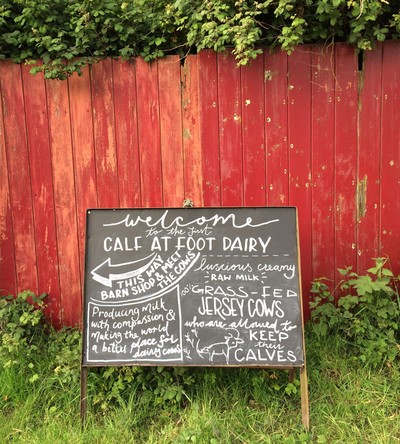 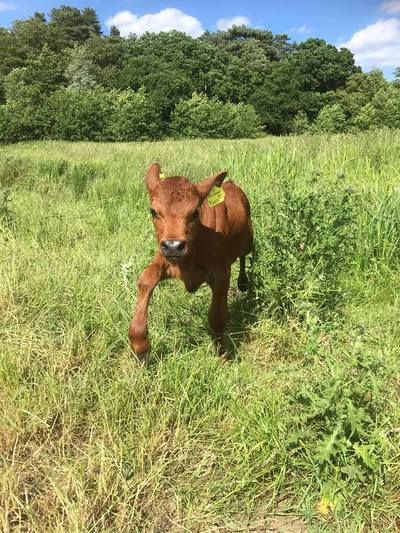 Fiona (The Owner) Provan, a first generation farmer, grew up with an overwhelming passion for the natural world, animals and all things wild..  She was the youngest daughter of a farm vet a hard & cantankerous Scotsman, Jim Provan had a reputation for being the best cattle vet in the district. J W Provan MRCVS was a single hand veterinary practice this meant the family were completely involved so always on hand family mucking in on just about every aspect of running a veterinary business,. Fiona loved being hands on nursing sick animals day and often by night she grew up surrounded by all creatures great and small.

"As a very little girl I loved to follow the neighbours cows along the water meadows as they were moved from field to field, being milked on the pasture in a small mobile milking bale towed and powered by an old David Brown tractor. The tenant farmer's three daughters were my best friends, and these days are the only part of my childhood I can look back on with any fondness or affection. In the main, my life has been dogged with depression which as a young girl wasn't acknowledged by those close to me.

I witnessed a lot of bad practice within the farming industry as I accompanied my father on his farm visits. I was drawn to and spent most of the visits with the calves in the dark sheds - each calf stuck in individual pens desperate for contact and more so for something to suck. I would go along the rows of calves offering them my hands to suck and felt they would swallow them if they could. I was too young and didn't realise the sad connection with the poor miserable looking cow stood outside in slurry on concrete with her head slung low or why that calf desparately needed to fulfil the urge to suck by sucking anything it can get it's mouth around and that sucking is the second reflex of a newborn mammal after taking it's first breath!
Dad knew where to find me and would have to drag me away from the calf sheds when it was time to move on for the next farm visit.

Our own neighbour the tenant dairy farmer and his family had to move off the estate when we were still fairly young and after many years we eventually lost contact with the family, those beautiful warm cows with their fragrant breath and that luscious proper milk.  I then watched in horror as the big destroyers/machines of Big Ag., and mass destruction moved in, wiping out the wild, tranquility and natural ecosystems with it's biodiversity of wildlife they grubbed out the trees, hedgerows and spinneys within the blink of an eye all life which had accompanied those cows was gone.  The emerald green ancient and what was permanent pasture, Earths protective skin like layer had been peeled away, the turf sliced and turned over by the plough, strip by strip, exposing it's underbelly the precious topsoil teaming with more life than one could ever comprehend our soil is the foundation of life as we know it!  Then the fatal blow, identically straight rows and furrows are sliced in for mono-cropping plants to supply nutritionally depleted food for the supermarkets, this soil will be eroded away until (within our lifetime) it can no longer support any life at all and to support a crop it has to be doused and drenched in poisonous petro-chemical hungry bio-cides and irrigated using precious water reserves.  No more fertile bio-diverse verdant water meadows flourishing with life, with ecosystems host and home to hundreds upon thousands of species of flora, fauna and fungi.  All that's left is an empty barren prairie of bare denatured soil - dead and nothing more than dirt who's sole purpose now is to be an inert medium to hold up the farmers crop. The killing fields of factory farmed plants this is what I call agri-genocide - this ladies and gentlemen is conventional farming for plant foods !

As I grew up I fought and spent decades of petitioning & relentlessly campaigning against the cruelty of factory farming of livestock and industrialised food production, with it's degradation of soils, destruction of ecosystems, our beautiful planet and risk to human health. The forces of mega-corporations, big ag and pharma are huge, the fight the frustration and futile attempts at trying to make things better allowed the curse of depression take a stronger hold over me.

I was a bad girl at school (i didn't take well to authority, and to be honest still struggle with it), when I left at 15 my parents forbid me to go into farming. I was sent to secretarial college and cookery school instead, unhappily I became a chef. I soon married and had three kids very quickly.  I worked in conservation and had a family smallholding with a house-cow, chickens, turkeys, ducks, pigs, horses etc but felt this was a poor attempt at making a living off the land and really just a hobby which couldn't be taken seriously.  The powerful drive to set up a micro-dairy as a way of making a living broke up my marriage and I was to became a single parent when my kids were in their early teens, I went to work, study and volunteer in conservation and farming.

The rise of the mega dairy was the last straw and once my the kids were off my hands I finally took the bull by the horns, and decided the way to go was by having a tiny perfectly formed dairy which I considered to be my first light bulb moment should be a 'micro-dairy', producing and selling Proper Milk from contented, carefree cows who lead a charmed and contented life, treated with love and respect and of course are allowed to keep their calves - in the same way we kept a 'house-cow'. The only difference is to try to make a living from selling the milk rather than it simply just being for the household .  It took a while to dream up the name of my micro-dairy until I had my second light bulb moment of combining two conventionally, incompatible & contradictory terms - 'Cow with calf at foot' and 'dairy' (not seen together in the conventional farming world), I married the two together and the first Calf at Foot Dairy was born.
​
"Don't be ridiculous"
After many years of hard slog, criticism and being told "it can't be done", "you're mad, it's a ridiculous idea" etc my grit and determination won through. Working on a shoestring it took a while but my micro-dairy, then with just 8 cows and their calves, was finally and officially launched at The Aldeburgh Food and Drink Festival September 2012. So there you have it, the original 'Calf at Foot Dairy' was official - a tiny dual purpose herd, selling Raw milk from Purely Pasture Fed Jersey &  native Red Poll Cows who are allowed to keep their calves! -  Needless to say, my father would turn in his grave.!
I now know why it wasn't enough for me to be just a farmer or to just work in the countryside protecting wildlife -  It was only about twelve years ago I educated myself learning that in fact cows and conservation go hand in hand or, hoof on turf that cows can save our planet!  I consider myself to be a regenerative grazier. I am simply a peasant tenant farmer, attempting to use holistic management with the intention of regenerating soil and biodiversity on the land within my care.  Cows, if allowed to graze properly, have a role to play in helping to reverse climate change.  Bring back the cow!  It's not the cow it's the how!
The soil our gut and brain is intrinsically linked without grazing ruminants the soil is nothing and we we are nothing. Never forget you are what you eat eats.
00000
Our cows us and now.
I never believed the cow was here to produce milk for us/people, no I think it's for her calf, but every day cows in conventional systems are suffering.  We are striving to make the world a better place for dairy cows our beautiful little dual purpose herd of 20 Jersey cows plus their calves spend their days munching their way through their ‘purely pasture’ diet and producing lots of nutritious, creamy RAW milk which we share with their calves.  A symbiotic relationship has evolved between us and our cows - we are they and they are us! Our cows are 100% grassfed and always allowed to roam inside and out with sunlight on their backs our cows are protected from the elements with shelter on all aspects.
Our cows all know their names and are treated as individuals and not as disposables or commodities, they come to the call and trot into the parlour one by one when their name is called., they are unrestrained during milking and are milked just once a day, allowing them the rest of the day to be cows and do cow things with the rest of the herd and their calves.
We are always open to the public, anyone can come along and watch us with our day to day work and of course to buy our proper milk.
Credit where credit is due.
Amy and Charlie are the CAF Dairy Angels, I am not easy to work for and without them this place would not be running as it does they are the backbone of the farm.. Also to Paul our long suffering volunteer who tries to keep me on the straight and narrow when it comes to office work. And of course Our Graham also tenant farmer neighbour who helps us out with a tractor coming in everyday bringing in his home grown pasture forage. 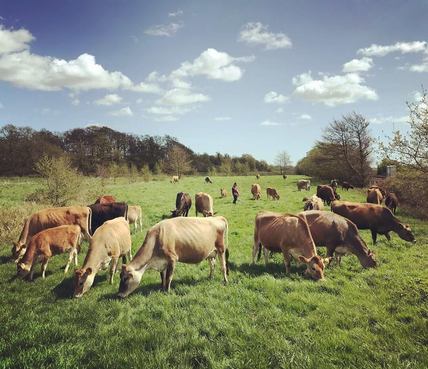 ​At The CAFD ​We are delighted to find there are more and more enlightened, compassionate consumers who share our desire to make the world a better place for dairy cows and  happy to pay a fair and proper price for humanely produced, proper milk.
We also train and help other would be calf-at-footers set up their own Cow-Kind, Calf-friendly micro-diaries and youngsters are always welcome for training and preparation for entry into a brave new world of responsible, regenerative and ethical farming
Rather than ask why is our milk expensive,
THE QUESTION TO ASK OTHER DAIRIES IS 'WHY IS YOUR MILK CHEAP?'
Warning of bogus CAF dairies.. ....We would like to make you aware there are bogus dairies using our name to sell their products, our website has been copied and needless to say we feel sick to the core. The Calf at Foot Dairy movement is about transparency, I would advise all consumers who really care where their food comes from to turn up unannounced at the farm and insist on seeing all operations have a tour and ask to see all the livestock within their care.  If they say their cows are grassfed then look for a feed store. Do they claim to be chemical free then look for the chemical store/equipment.